How is British English different from American English?

English is considered to be one of the most popular languages in the world. It is the native language for more than 400 million people on our planet and at least 1 billion people can speak English fluently. Of course, because of cultural differences and various historical events, dialects have emerged. Surely you’ve heard about the most popular language variant, the American one. How does it differ from the “original” British?

A brief historical background
Wanting a complete answer to this question, you should pay attention to the history of American English. In the 17th and 18th centuries the United States had a huge number of immigrants who came from England, Spain, Germany, France, Norway and Sweden. The people who set out to explore uncharted territory needed to engage in production, establish trade, and create optimal social and economic conditions. 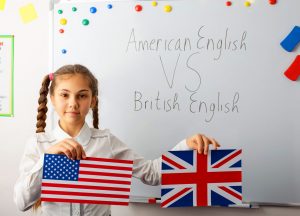 To achieve common goals, people were in dire need of one language. Not surprisingly, it was not the pretentious and refined English used by the aristocrats that moved to the Americas. What people needed was a practical, accessible, and understandable language of the people. Shifting priorities, the exchange of experiences between representatives of different nations, the peculiarities of the local climate and nature led to a gradual modification of familiar English, the emergence of a unique slang.

Phonetics
American English is sharper and faster due to specific features in pronunciation. Consider the main characteristics of phonetics:

The sound [ e ] is virtually the same as [ ɛ ];
in the sound [ ju: ] after consonants [ j ] almost disappears. Often U.S. residents pronounce the words duty and student as [ `du:ti ], [stu:dent ];
the sound [ r ] is pronounced regardless of its location in words;
Americans often do not pay much attention to diphthongs, for example, the word fate can sound like [fe:t].
How can such differences be explained? As noted above, American English has been influenced by the speech patterns of newcomers from around the world. People often disregarded traditional phonetic rules. British English is governed by a single pronunciation standard, Received Pronunciation. In the United States there are various regional standards.

People who study classical British English are aware of the meaning of the intonation of phrases. It can be descending, ascending, sliding, stepping, etc. Americans do not attach much importance to the manner of pronunciation. As a rule, a flat intonation scale and a descending tone are used.

By the way, when studying phonetic differences, we should not forget that it is not only the general rules that are different. Some of the same words in the British and American versions are pronounced quite differently. For example, people in the United States pronounce the word schedule with the squ sound at the beginning, while British people pronounce it with the sh sound.

Grammar
British English has a rather complicated grammar. A huge number of tenses, which can easily confuse not only a beginner, is not the only peculiarity of the language. In the U.S. everything is much clearer and laconic. American English assumes the use of simple tenses: Present, Future, Past Indefinite. Even the Present Perfect tense, used to indicate a perfect action with a visible result, is successfully replaced by the Past Indefinite.

Interestingly, even the adverbs just, already, and yet in American English can be used with the Past Indefinite, contrary to the rules we are used to learning.

2. The use of will and shall. In British English with first-person subjects the shall form is still used to indicate a future action. In American English, will is most commonly used. (I shall call him later = I will call him later).

Spelling and Word-Formation
The American spelling can be called more simplified than the classic British spelling. For example, U.S. residents often drop the u from the ending -our :

colour – color
labor – labor
humour – humor.
Some words that in the British version end in -re, in the American “version” end in -er. For example, the word “theater:

theatre (Brit.)
theater (Amer.).
Words that in Great Britain end in -ise, in the U.S. end in -ize. For example, the word realize: 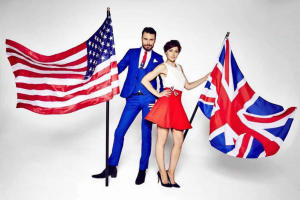 New words regularly appear in English that are formed by word formation (verb and noun). The difference is that the British use a gerund for this purpose, while Americans prefer to take it easy and simply combine two words. For example, a sailing boat is called a sailboat in the U.S. and a sailing boat in the U.K.

Word usage
First of all, the difference concerns abbreviations. In England they are often used without dots, while in the U.S. they are used exactly the opposite.

People who study a foreign language will also be interested in difference in preposition use. In American English, you can safely omit on before the days of the week.

There are inconsistencies in the use of prepositions for and in. In the U.S., they are considered interchangeable if they refer to a period of time up to the present moment. In the UK, only for is used in such situations. Let’s take a simple example:

Vocabulary composition
Perhaps the differences in vocabulary between American and British English can confuse even someone with an excellent level of knowledge. The catch is that some words and phrases are found in both “versions” of the language, but they express different meanings. For example, in America the word pants means pants, while in Britain it means underwear. Because of ignorance of the differences, you can get into a very awkward situation.

Also, British and American English use different words to translate the same Russian words. For example, candy is called candy in the United States, and sweets in the United Kingdom.

There are some details to pay attention to while studying the language. In British English, the word holidays is most often used for a long vacation or vacation. In the United States, the word is mostly replaced by vacation.